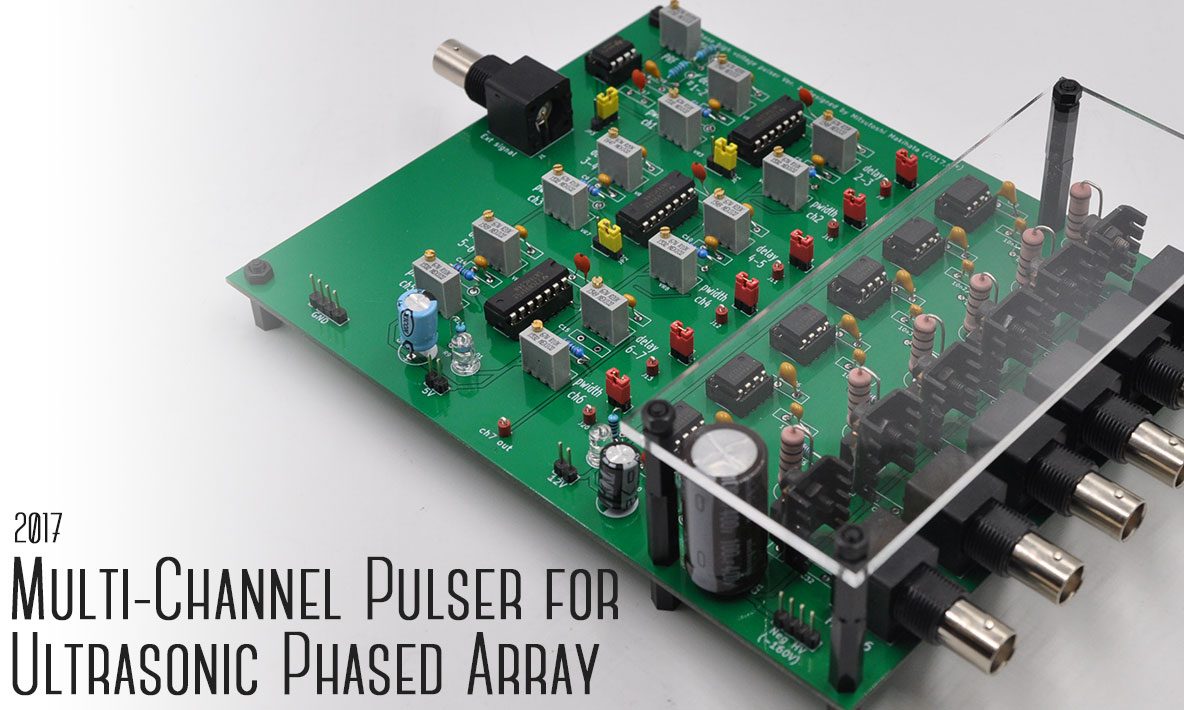 This project was done in collaboration with my friend who studies an ultrasonic array device  (will be specified when his work is published ). His goal is to measure an acoustic property of human body using a pair of ultrasonic transducers placed on a skin. He was facing the signal decreasing as piezo actuator becomes smaller, and experimentally confirmed that inclining the acoustic beam by a wedge structure increase a signal level. But the wedge is too bulky for his final application. So we decided to do a short collaboration to alternate the wedge by phased array ultrasonic actuators. To achieve minimum turnaround time and cost for the proof of concept, I decided to make our own circuit board for an ultrasonic phased array(PA).

Phased array is very common in the field handle wave functions, such as acoustic, electromagnetic and optical. The basic idea of how to tilt the wave can be explained geometrically as shown in the figure below. If the size of transducers is small enough compared to target depth, we can assume the acoustic wave as a spherical wave. Assume if the timing of excitation of elements has exactly same time delay “Tau”,  constructive interference occurs along the line tilted by “Theta”. You may also notice that phased array is just mimicking the wedge structure by changing the timing of wave which is equal to the one caused by physical distance difference. This model is a good start to a design of the pulser. But acoustic simulation gave us more detailed insights.

As always, the fastest way to learn new physics for me is using Multi-physics simulator such a COMSOL.

Acoustic coupling with a wedge structure

A typical idea for making phased array pulser from scratch might be using off-the-shelf ICs such as LM96550 (TI), MD2134(Supertex). But these chips require a lot of peripheral digital circuits to program and communicate. FPGA(Field-programmable gate array) + high voltage MOSFET would be next choice. However, achieving small time resolution with digital FPGA (especially less than 20ns) still need additional effort. So I came up the idea using legacy TTL(Transistor-Transistor Logic) + MOSFET so that the pulse width and delay time can be tuned only by turning potentiometer. As analog circuit does not have any limitation in time, this board will be the handful tool for this feasibility study and possibly can figure out the requirement on the more sophisticated pulser to be developed in the future.

Making nanosecond level delay and pulse can be realized by very old TTL ICs such as 74HCxx series. each TTL has few nanosecond delay time and large delay can be realized by the Low Pass Filter (LPF) followed by a buffer. Nanosecond pulse can be generated by the circuit called “Half-monostable circuit[1]” which uses High Pass Filter(HPF) to covert edge into a pulse signal. Again, nowadays more sophisticated ICs are available such as DS1023 (Maxim) for programmable delay line and DS1040 (Maxim) for pulse generation. if I had enough resources for this project I would definitely go with these. Please refer the appendix below for other solutions. 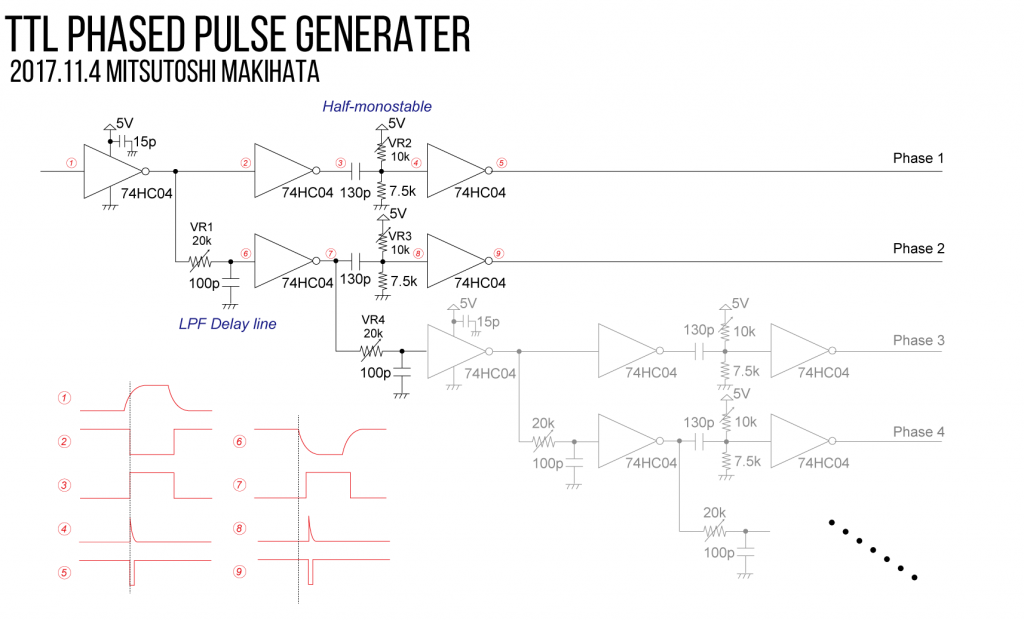 Converting TTL voltage to high voltage requires not only high voltage transistor but also gate driver which has a capability of a large current to drive a high power transistor [2]. We use UCC37322 which can generate 9A according to the logic input.

The actual result with ultrasonic transducers device is underway. Following is measured outputs from the completed board.

KiCAD project file and schematic in PDF will be available soon.

2N3904 very common transistor becomes a pulser when it biased more than 120V.