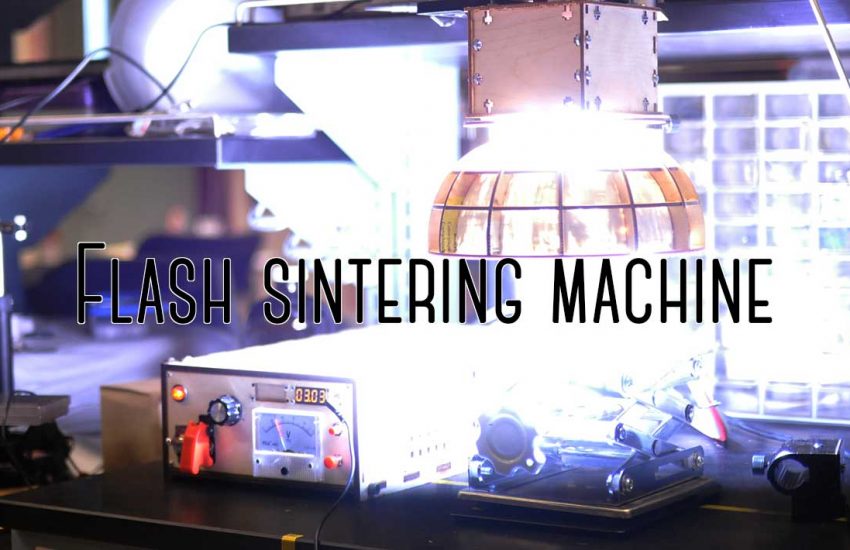 You may not believe if someone says they can melt the metal on a paper. But actually, it is possible when metal becomes nano-particle. It is known that melting point of material decreases as the size of particle approach to the nanoscale. You can imagine two situations of a single atom,  buried in billions of atoms and surrounded by hundreds of atoms. The latter may require less energy to come out or migrate. 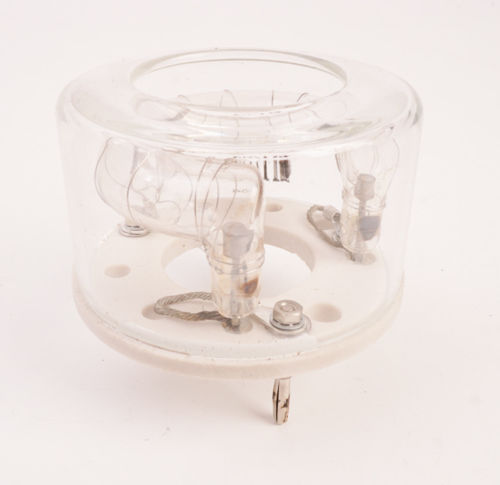 This flash machine uses Xenon flash-tube, which is cost friendly and well studied. Xenon flash tube is known to have a broad spectrum of wavelength similar to sunlight. The basic structure of Xenon flash tube is hermetically sealed glass tube where Xe gas is filled and two electrodes (anode and cathode) are formed at the ends of the tube. As you can see the picture on the left, there is the third electrode which is wounded about the Xe tube. This is called “trigger electrode”. This electrode works to “tickle” the tube to start instant discharging between anode and cathode. The appropriate voltage for trigger electrode is about 10kV and the one for anode and cathode is around 400V ~ 2000V (ofcourse it depends on the size of flash bulb.)

CAUTION:
This circuit handles lethal voltage and current.
Never built this circuit without a full understanding.

The pulse duration and maximum density can be controlled by the capacitor connected in series with the tube. 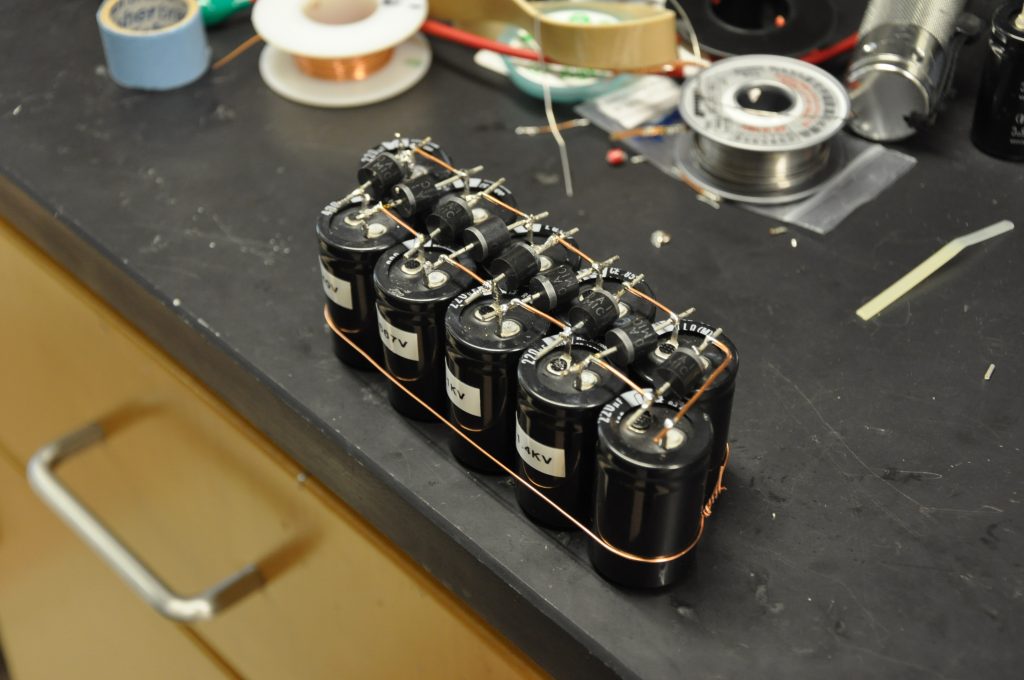 note: discharging of this capacitor need start from the lower stage of the bridge. 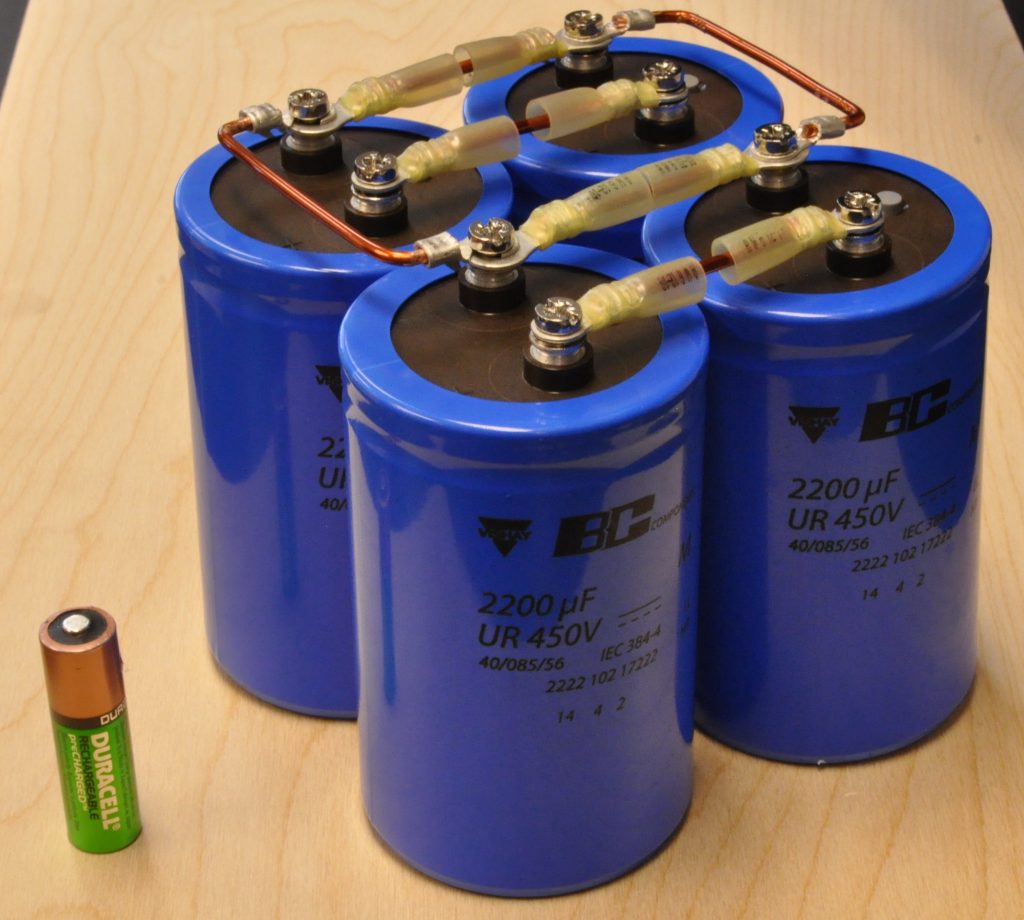 To convey all photon energy into the substrate, I introduce a parabolic mirror. Parabolic mirror is most simple optical which can be made cheaper and quicker. 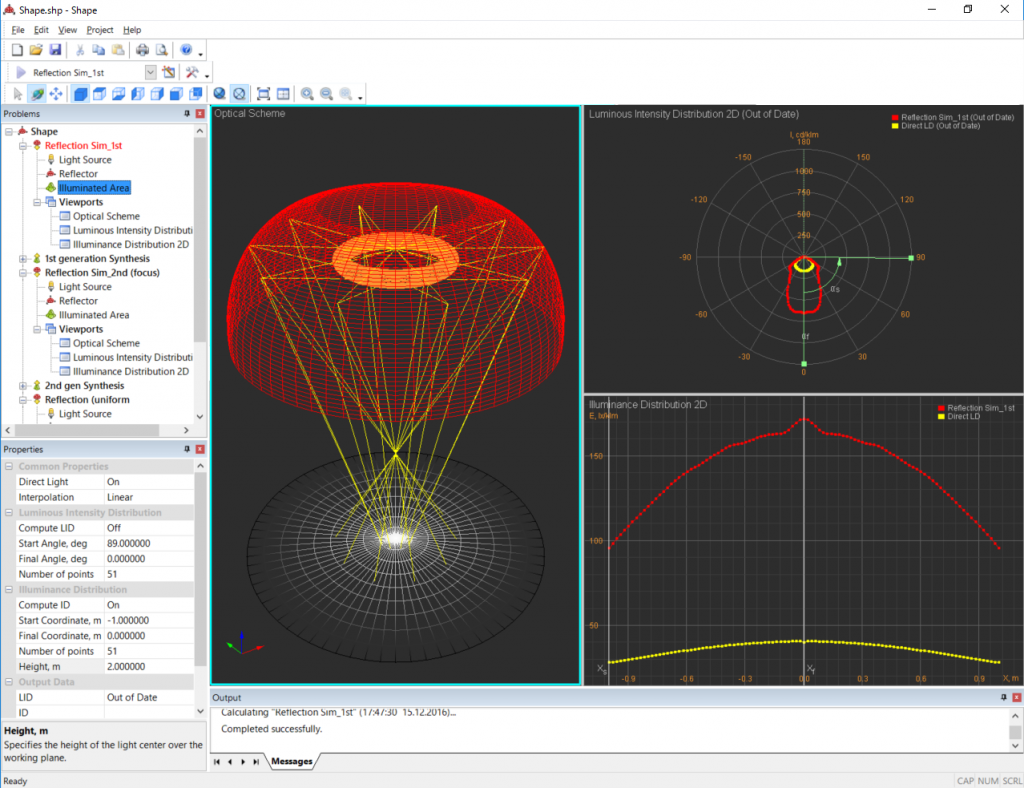 Optimized mirror curve was then transferred to CAD file then wooden scaffold looks like the figure below is created. The gap is span by masking tape and reinforced by spackle (plaster). Per reflection material, I patched mylar blanket cut into small pieces with double-sided tape. I know, it was a painful job! 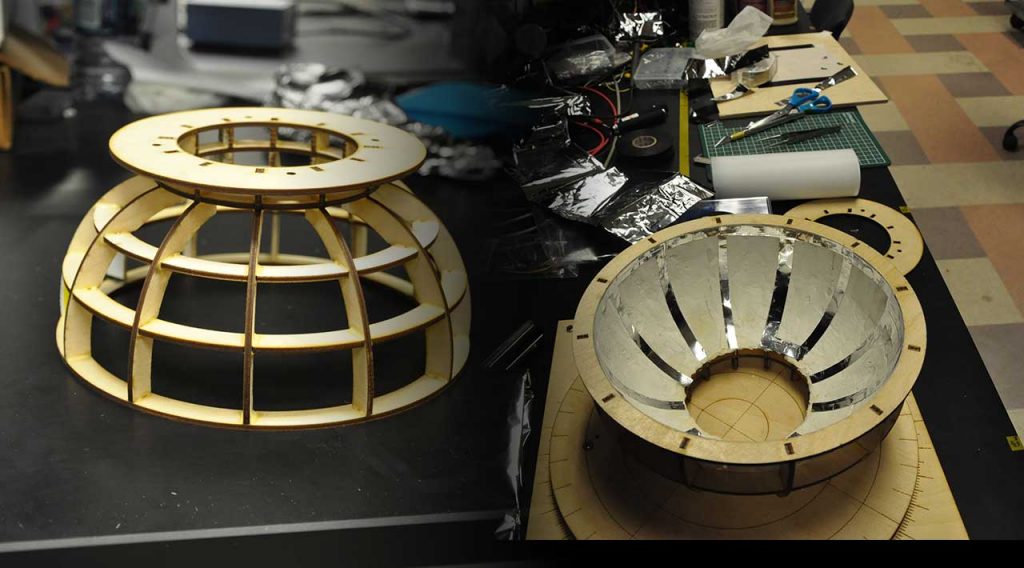 The measurement reveals that power at the center point becomes X times while uniformity is acceptable.

From directivity measurement, I confirmed the three times increase of intensity of light at the center of mirror and keep photon loss within 10%. This is surprising result with this “poor man’s mirror” made by emergency blanket.

Voltage and capacitance [to be updated]

Most of the illuminometer we can buy are designed for photography and can measure only the psychological quantity based on human perception (luminosity factor) such as Lux and foot-candle. So the only solution for me who does not have any equipment to measure actual photon energy “Irradiance (W/cm^2)” is making one by myself. (again!) The following is the brief information about my illuminometer composed of Hamamatsu Photonics’s photodiode(PD) “S10784”.  The enclosure can mount several kinds of optical filters. As power rating of S10784 is 50mW, the output resistance is set to 560Ω.

Ok, making illuminometer seems easy so far. but actually most challenging part is calibration! As readout from this device is current, It is necessary to, somehow, find out the relation between units of [W/cm^2] and [A]. 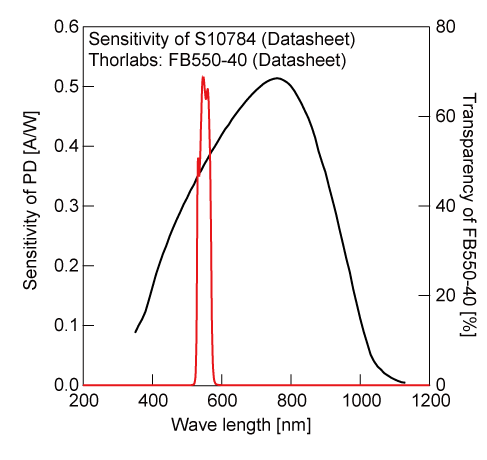 First, I am going to mention how to eliminate the wavelength dependence of the sensitivity of PD. Please look at the figure below, Black curve (Left axis) is the sensitivity of PD captured from the datasheet of S10784. Using optical bandpass filter (BHF) always makes this calibration easier. I use the one found on my workbench which I have previously purchased on eBay (550-40nm for excitation of Rhodamine-B). You can roughly determine the sensitivity after the filter is 0.37A/W. 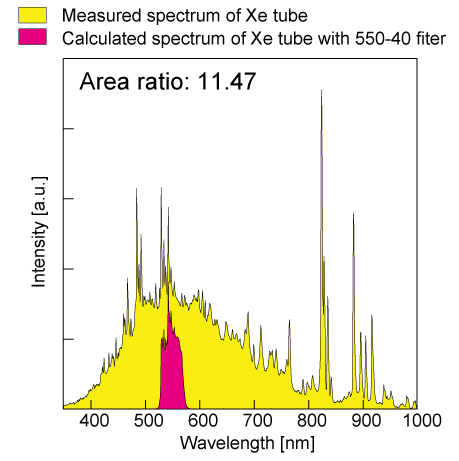 By using the effective sensing area shown in the database of S10784, you can convert into W/cm^2. Following spectrum of the flash-bulb is measured by USB4000(ocean optics). Even though the unit is arbitrary, total irradiance is calculated by using the area ratio between yellow and purple part.

If you have an access to the integrating sphere for calibration, you can more precisely calibrate the irradiance.

Analog panel meter for over 2kV.