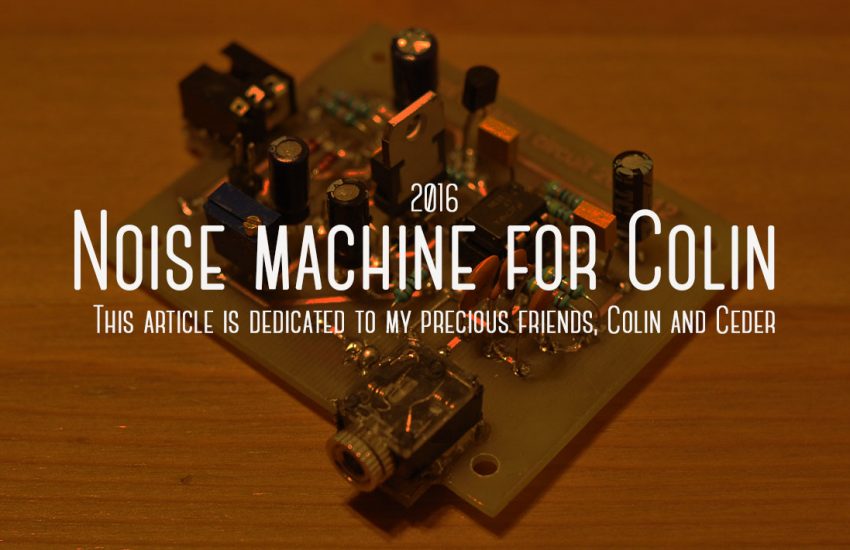 In the end of 2016, I read my friend’s post on Facebook mentioning that her son, Colin, putting his ear on a fan for a whole night. According to her post, he can not sleep without doing that due to the ambient noise. The picture was shocking enough and I couldn’t help to think what I could do. After several hours of a literature search, I learned that some autistic kids have a hypersensitivity to an ambient noise. It is really hard to imagine if we could not ignore any noises. There, I guess that the noise from a fan overwrites the ambient noise, as human perceives sounds logarithmically. The logarithmical sense means that we have poorer sensitivity at loud sound than small sound to ensure large dynamic range (Weber–Fechner law). So white noise may push up bias of the ambient noise and make it difficult to hear and recognize sounds by interference.

The final goal is to prototype the noise machine which is tiny like an earplug. As a first step, I made the bulky but fancy looking machine as a Christmas gift for them.

The design principles are as follows.

The following is initial design for determining the dimension of a circuit board. CAD patterns ware directly used for laser cutting machine. 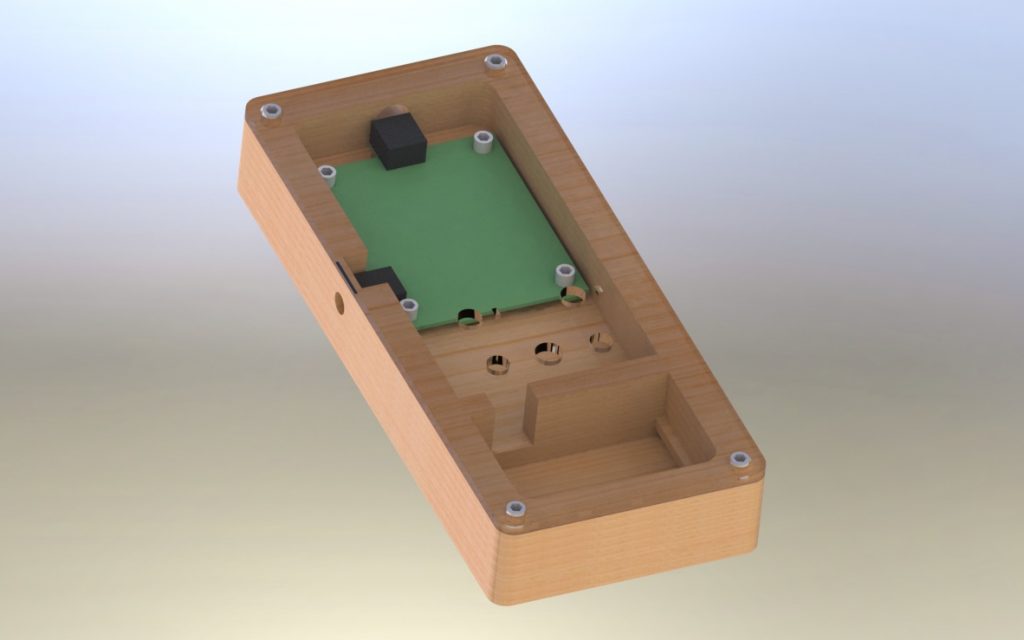 The overall schematic is shown in the figure below.  This combination of a white noise generator and a variable filter is known as “the wind machine” (Proto-Schlock or this forum).

The left side of the schematic is power circuits. As noise generation requires more than 7V, I choose 9VDC as it can be obtained from a battery. The Linear regulator (LM317) is to generate 9V from externally supplied 12VDC. The switching between the battery and linear regulator is done by using a mechanical switch in DC jack. Two diodes are used to prevent backflow of current, but I haven’t seen any issue without those so far.

A simple circuit is a thing that I am always looking for. The noise generation stage is based on the Zener breakdown of an ordinally bipolar transistor which exhibits shot noise [1]. Here, I used 2N3904 (NPN bipolar tr.) as a Zener breakdown element.

The small noise signal is then mixed with DC annotated as “ref” through 0.1uF capacitor, which enables amplification with single power supply, i.e, battery. As you may notice on the schematic above, first op-amp stage has a large gain in AC but unity gain in DC thanks to the electrolytic capacitor near GND. The second stage is well known band-pass filter using a single op-amp. 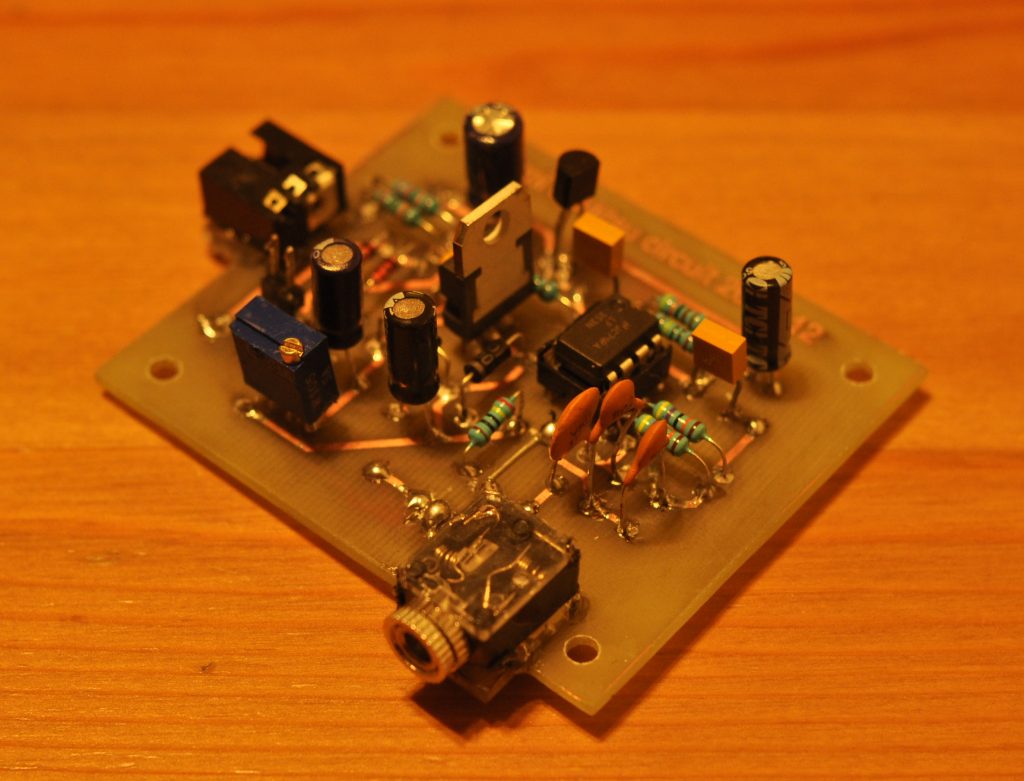 The board design of this schematic is done by the Eagle. then PCB is prototyped by using Toner transfer paper and copper etching using ferric chloride. It was a little bit tough to do backside alignment as the transfer paper is not transparent. Also, I used a hotplate and a rubber roller, not a hot-laminator. But the result is acceptable.

If you are interested, you can see the spectrum of these sound in the appendix below.

The wooden enclosure is realized by stacking 1/8 thick plywoods which are cut by CO2 laser.  It makes machining easier, also possible to embed bolts and nuts inside of the enclosure. 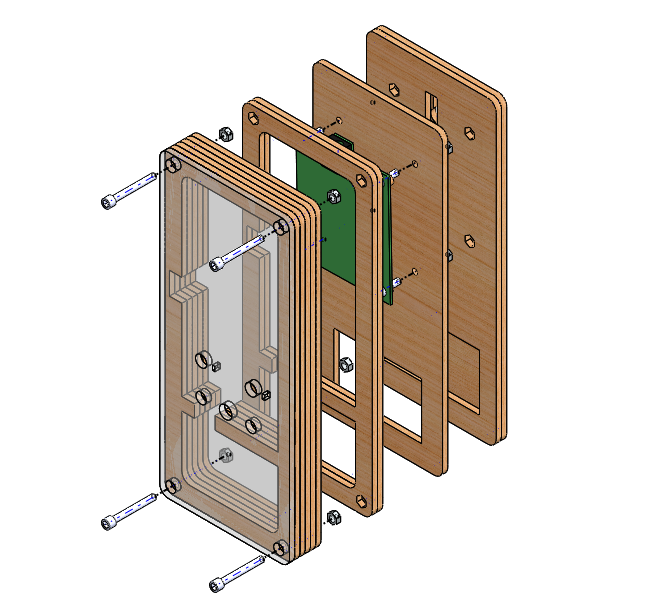 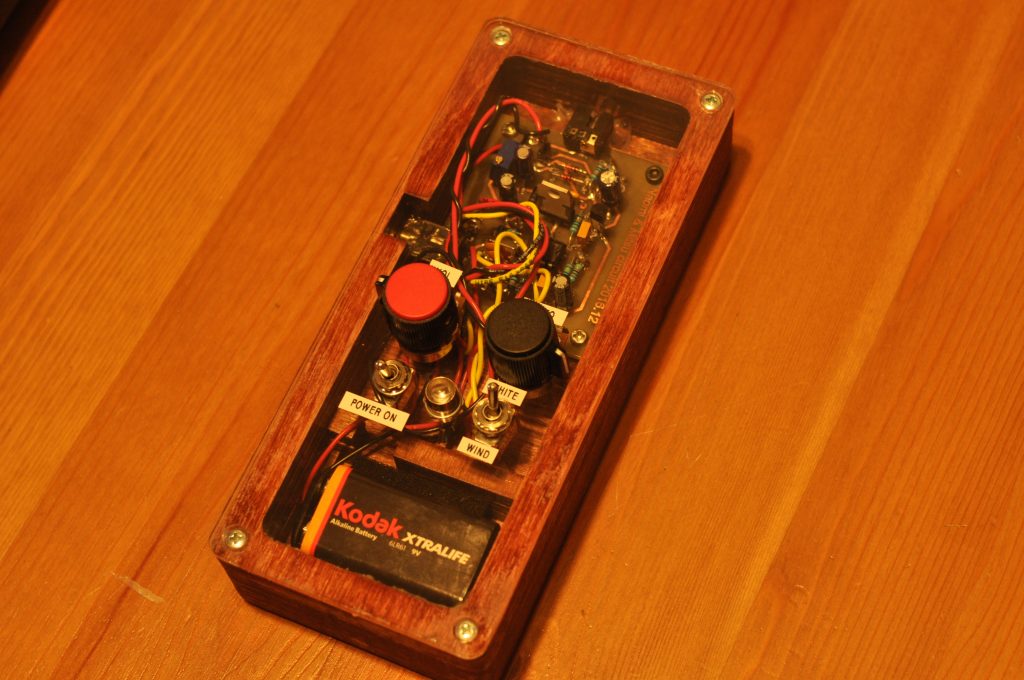 This is completed devices. Colored by oil stain and have a transparent lid. 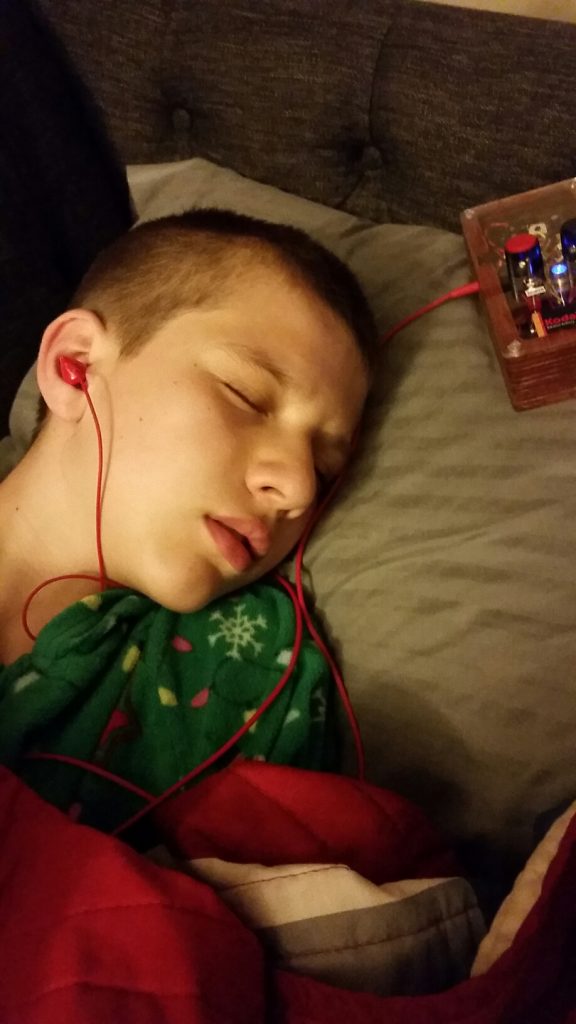 After several weeks later, I got this picture. This was the first moment in my life making electronics to my friend who really needs, and I think I am lucky enough to be able to serve like this to somebody.

I would like to you to imagine for seconds what if you have the same tendency as him who cannot ignore (adapt) any ambient sound all the time. I still remember his face suffering something we can not see. if you think this machine works for somebody you know, please don’t hesitate to contact me (makifata@gmail.com).

Eagle project file for circuit and DXF file for enclosure design can be download from URL down below.

The FFTed signal of output signals are depicted below.