The overview of the tactile sensor network is shown on the right.  The MEMS tactile sensor chips are mounted on a strip of flexible flat cable and form serially connected sensor array.

This bus topology solves a wiring problem when a number of sensors increased. On the other hand, a sensor must have processors to communicate with shared single cable.

This tiny but smart sensors are realized by my MEMS-CMOS integration and packaging technology (http://mmakihata.com/blog/2017/01/27/integratedtactilesensor/)

As many sensors are individually working and sharing single communication wire, it is necessary to avoid packet collision. In our system, we introduced a novel media access protocol inspired by tactile receptors on our body. This organ transmit nerve impulses when a mechanical stimulus exceeds a threshold or has time variation. 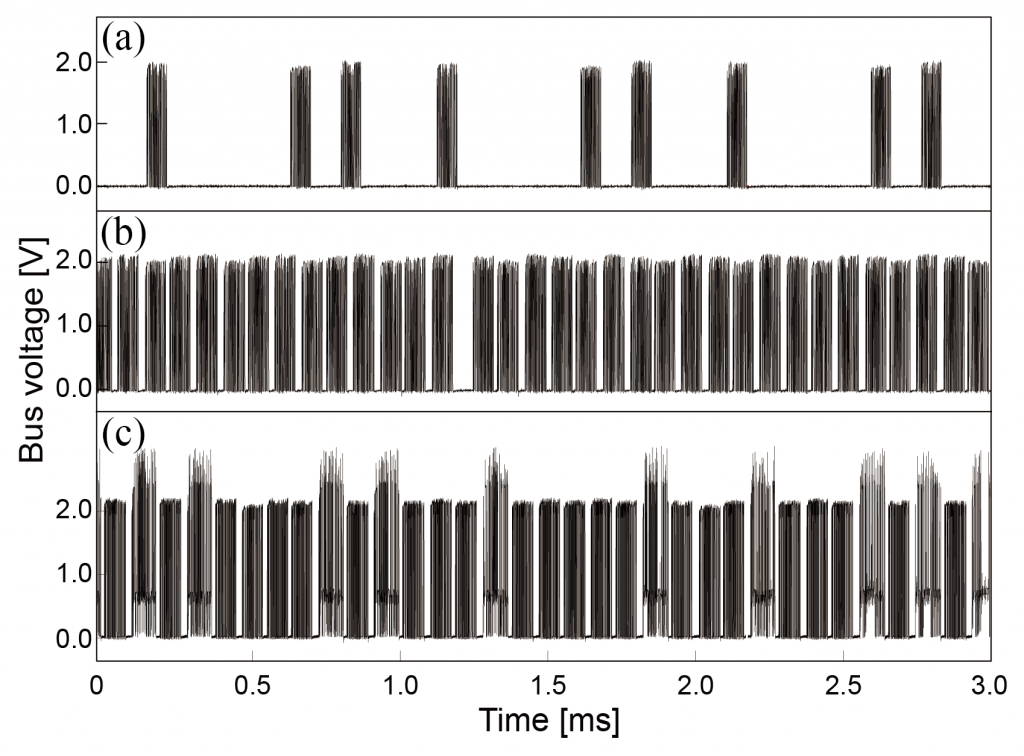 Even though significant improvement on response time due to the autonomous transmission, a collision of packets have to be considered as a number of sensors increase.

In the ASIC integrated with MEMS, the media control access protocol is implemented. The sensor keeps monitoring until a bus line become empty when they obtained meaningful data, which is known as “p-CSMA( Persistent- Carrier Sense Multiple Access)” like an early age of wireless communication or ethernet .

As collision of packets can not be avoided completely when multiple sensors are transmitting exactly same time, an experimental confirmation of sensor network is necessary. Right figure is experimentally measured bus voltage to confirm bus traffic and number of packets.

You can also check the video which shows an overview of this tactile sensor project.